Rail Tour Through the Alps

(Note: Clicking on any image in this travelogue will bring up a full screen version of the image.) 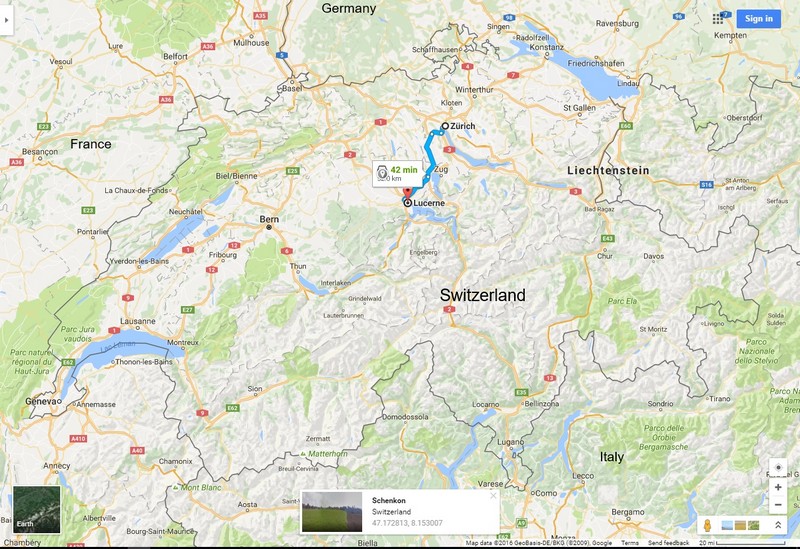 Larry Flanigan is a prince. He picked me up at noon, and ferried me and my bags out to JFK Airport. The trip was overall not nearly as bad as it might have been. Mostly clear sailing over the George Washington Bridge and down the major New York City arteries with only a minor backup on the Van Wyck as we approached the airport itself. Although from the looks of the traffic going the other way on the Cross Bronx Expressway (Now there's an oxymoron!) he was figuring he'd better find a way back home across the Verrazano. Larry also agreed to take care of my cat, Keira while I was gone, and pick me up again from the airport when I returned.

The flight was uneventful. Well almost. After checking in my baggage, I picked up my laptop case by its shoulder strap. The strap was looped around the case itself, and flipped it upside down, and the computer came tumbling out of the case onto the polished stone floor. As it turned out there was no damage. Dell makes a good machine.)

The flight was also loooooooong. Left JFK at 5.25 PM, and landed in Dusseldorf at 6:50 AM local time the next day. (Subtract 6 hours for time difference.) Then Dusseldorf to Zurich from 8:45 to 10:00, and finally a 45 minute limo transfer to the hotel in Lucerne, getting me there roughly at 11:00, 17 hours door to door. And of course the hotel rooms weren't ready yet. By the time I hit the rack that afternoon around 3:00, it had been 31 hours pillow to pillow. (Not counting those little mini-pillows they give you on the plane.)

The ride to the hotel was very pleasant, and would have been more so with more sleep under my belt. The roads were immaculate, smooth, and about 20% underground. The Swiss have become very proficient with tunnels, for obvious reasons considering the terrain. They've got the longest one in the world, a twin-tube rail tunnel some 35.5 miles long. Another difference that struck me is that in the US (at least in the East where I live), we only use tunnels on interstates and other major multi-lane highways. In Switzerland they are common even on secondary 2-lane roads. It struck me as unusual to see oncoming traffic in the other lane in a tunnel.

In the lobby of the Flora hotel, I was greeted by Jan (Pronounced "Yahn"), our tour guide. He was a big jovial fellow from Slovenia, who spoke eight languages, and was very knowledgable about the places we visited. He was invariably helpful over the course of the trip. The group consisted of 35 people, mostly in their 50s to 70s from the US and Canada. They were all trickling in over the course of the afternoon as their various flights arrived, and he was getting everyone settled.

Jenny and I flew separately. She lives in Vermont, and it made more sense for her to fly from Boston than to drive all the way down to New Jersey to travel with me. She was due in sometime around 3:00. If I had a room available, I would have crashed in it. But not wanting to be found snoring in an armchair in the lobby, I figured to make some use of the few hours and see something of the city. I asked Jan about the local sights, and amongst the others, he suggested the Transport Museum with a good collection of trains. That sounded like just the ticket.

I got a city map, and found the museum. I had not yet had a chance to change any money. (Good thing I didn't. I would have gotten euros. The local currency is the Swiss Frank. Switzerland is not in the European Union as I had thought, and does not use the euro. Franks, euros, and dollars were roughly at par with one another.) So tired as I was, I resolved to hike the mile and a half or so, rather than go by bus. I crossed the Chapel Bridge to the far side of the river, and walked along a beautiful rambling, but exquisitely tended lakefront park, with gardens and pathways and various fearless waterfowl.

Admission to the museum was a pricey 30 franks, (Credit cards work internationally.) especially since I only had about an hour to spend before I had to get back. But I had made the hike, and so I figured I might as well. There was a lot of really interesting and unusual stuff, but I was so tired that it was hard to appreciate it. I eventually hiked back to the hotel, found my room ready, and headed upstairs to crash.

Jenny came in sometime in the afternoon, and had the good sense to let me get back to sleep after I greeted her. We went out and poked around the town. At dusk, a sextet of alpenhorn players took up station at one end of the Chapel Bridge, and serenaded the city. They were not all that loud, but they could be heard for blocks around.

Switzerland is an expensive place to visit. We were resigned to paying for meals and other purchases at New York City prices. (There's that other currency exchange rate that is not listed in the websites: Dollars to Vacation Dollars.) But the food was good, and we are both light eaters, so we generally split a single meal. We found a riverside restaurant, and sat along the water and ate and talked. The old city was really beautiful, and well maintained. All the buildings and streets were adorned with profusions of flowers. Many of the old buildings had their outside walls decorated with elaborate paintings, or perhaps frescoes. And some of the newer ones were similarly painted to maintain the style. The buildings across the water glowed with light; the air was comfortably warm, and I was well content. We hit the rack again about 10:00. 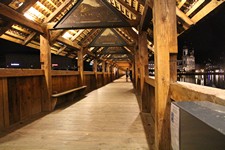 15. Chapel Bridge by night
Note the triangular paintings at each bay of the framework. Some original, some restored. 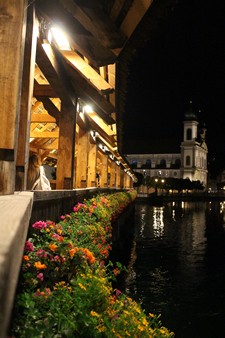 16. Flowers planted along the Chapel Bridge.