My friend Jenny was down for Thanksgiving a couple of weeks ago. We were listening to the radio, WNYC, the New York City public radio station. They came out with their latest pitch for sustaining memberships in the form of a haiku. I mentioned to her that, while I could count syllables, I never could feel a haiku the way I could instinctively feel the meter of a limerick. The conversation continued, but a couple of minutes later, she reached for a piece of scrap paper, and started scribbling. And she handed me the following gem:

There once was a man
from Nantucket who preferred
haiku to lim'ricks.

I just burst out in laughter and applause. I found that so clever and so funny that I had to spread it around. I quoted it to friends, and added it to my signature block on my emails, crediting her, of course. Ever the modest genius, she told me she would prefer not to have her name attached to it. And now I'm finding that among my circle of friends people are telling me that they've just heard it recently when I recite it to them. It's going locally viral. I got numerous kudos in reply to my emails, which I forwarded to her. So, yesterday, in response to one of those forwards, she sent me the following:

When they ask if the rumors are true,
I'll say I had nothing to do --
whatever you've heard
from a "tweet" little bird --
with the Man From Nantucket haiku.

Not to be outdone, I then composed this response:

Shall I compare this to thy new haiku?
My sonnet's longer, and it rhymes much better.
And an apostrophe is needed to
Conform with haiku meter to the letter
In that most clever verse thou lately penned
About the well-hung fellow from Nantucket,
Whose preferential verse form, I'd contend,
Hath not the value of a wooden ducat.
The haiku form hath little hold on me.
I cannot get the sense or feel the meter.
The limerick is better for off-key
Burlesques about the length of someone's peter.
The Bard might not approve of this, I fear.
But he who wrote this verse is no Shakespeare.

On the theory that anything worth doing well is worth doing to excess, I thought I'd try a double dactyl (A.K.A. higgledy-piggledy) as long as I was on a roll:

On-and-off Stroganoff M. Jacob Agranoff
Finds that a haiku won't
Fit in his head.
Sonnets and limericks
Don't hack it either. Tries
Hexasyllabical
Dactyls instead.

I thought it was kind of lame. But Jenny liked it. I trust her judgement over mine in all things literary.

A friend who read this Blog posting just sent me the following which he read in a newsletter. The author was not attributed.

There was an old man
from Peru, whose lim'ricks all
look'd like haiku. He

Said with a laugh "I
cut them in half, the pay is
much better for two." 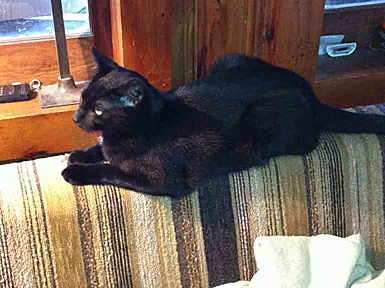 Three days ago, Tuesday, Sasquatch showed up on my porch after having been out all night. He was listless. Shortly after I brought him inside, he began crying and throwing up. I brought him to the vet, who pronounced him in bad shape: low body temperature, and signs of oxygen starvation. There were no signs of injury or other trauma, and the vet thought he might have ingested something poisonous. I left him under the vet's care. I received a call later that day that he had died. I only had him since February.

I am bummed, but I'm relatively stoical about it. I'm mostly feeling OK, except now and then when I catch myself doing things that were predicated on having a cat in the house: Putting my breakfast plate down on the floor for a "pre-wash" before doing the dishes; arranging the kitchen trash can so that it could not be easily tipped over; checking to see that no small critters could dash in when I open the front door to leave. That's when it hits me. I'll get over him. I'll probably get another cat eventually.

To all those who know I live right in the path of the recent storm:Thanks for your concern. I got away real easy this time. Especially compared with my experiences with Irene last year. Go to September 5, 2011 for some scary pics. And then come back to June 1, 2012 for my remedy for what turned out to be Sandy. Sandy split in two, and the precipitation passed north and south of us. The river never went out of its banks, and I suffered absolutely no damage or injury. Lotsa wind, though, and I had no hard-wired services (electricity, internet, land phone, TV). Cable was restored, along with phone & internet Saturday. The new generator is serving nicely for electricity.

Latest issue is gasolene. The number of stations that have both gas and electricity to pump it are very few. Long lines and short tempers abound. I still have half a tank in my Mini Cooper, and I ain't goin' nowhere far until NERFA, by which time that situation should be alleviated somewhat. My propane supply for the generator is now at 55%, and started out Monday at 70%. I'm reasonably stocked in food and cat litter. So with prudence, I should be able to get through this without undue stress.

Update: November 6: At around 5:30PM there were 3 white trucks with flashing orange lights and long booms at the head of my driveway. An hour later grid power came up, and the generator shut off. Everything at home is back to normal. I was out earlier today, and more and more gas stations were open, and the lines were much shorter; most less than a block long. Normalcy is within sight for this inland area. I feel for the folks at the coast. 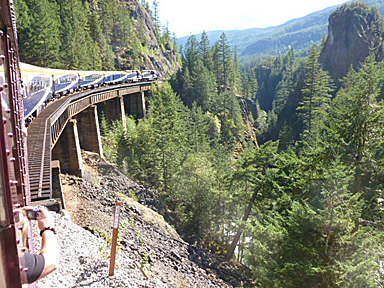 I just got back from a vacation I've been wanting to take for almost half my life.

Some time around 1988 or so, I had a business trip to Salt Lake City. I decided to combine that with a few vacation days to visit a friend in Denver. And for fun, I decided to take the train to Denver. Well that ride was 13 hours with my nose glued to the window of the observation car. I raved about it for weeks, including to my friend Bob Silverman. Bob said, "You think that was good? You oughta try the route through the Canadian Rockies!" And he lent me a book about the experience. It took Bob several years to get that book back from me. And the bug was firmly planted in my brain to take that trip. Well, being out of work, and financially able to swing it, I took the plunge. And it was truly a memorable experience. Enter the travelogue.

What's wrong with this picture? 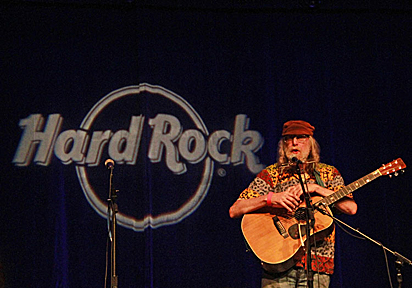 So what on Earth am I doing on stage at the Hard Rock Cafe in New York City?

Long story, which starts about 30 years ago. And the first part of that story can be found on the December 15, 2007 entry in my Blog when I performed at a concert celebrating the 25th anniversary of iconic progressive rock DJ Pete Fornatale's "Mixed Bag" radio show. Pete sadly and suddenly passed in early June. And his many friends in the worlds of music, radio, and WhyHunger put together a memorial show. I was asked to join Peter Yarrow, Christine Lavin, Julie Gold, John Platt, Dennis Elsas, and about two dozen others who knew him in a program of music, memories, eligies and stories about him.

I was very much at the outer fringes of this gathering. Most of the others knew Pete intimately as well as professionially, whereas I only knew him through his discovery and support of my recitation, "The Ballad of the Sandman", which he unfailingly aired every year on his radio show closest to New Years Eve. I learned a lot about Pete from the speakers that night. Or rather, I learned that my impressions of him from the few times we met were absolutely true: He had the capacity to make you feel that he was speaking directly to you and that you were the most important person on Earth, even if he was broadcasting to a listening audience of half a million. It was him I was thinking of when I wrote in Sandman:

And gone was all the mile-a-minute brainless DJ chatter,
And singing station breaks, and other aural fecal matter.
Instead, these guys, with wit and charm, told what they had to tell,
And spoke as if they thought I might have some brains as well.

I had thought to perform "Sandman" at this memorial, but it would not have been appropriate. It's way too long, and no one spoke or sang for more than 5 or 6 minutes. Instead, I played "The Folkie", my parody of the Simon & Garfunkel song, "The Boxer". George Wurzbach joined me on stage to sing Art Garfunkel's harmony part for that song. Here's a video of that performance.


If you scroll down to my entry of September 15, 2011, you will find my adventures with Hurricane Irene. As you will discover, despite my house's being surrounded by 8 feet of water, my very early decision to raise it saved me from any significant damage except the destruction of my emergency backup electrical generator. I wanted to replace that generator and install it such that it would survive a similar event, even though I am confident that I will never see another such in my lifetime. That plan was complicated by building codes that required the generator be installed no closer than 5 feet from the house structure. I decided to design and build a steel tower adjacent to my kitchen deck upon which to mount the new one. I also designed a cradle on casters upon which to mount the generator itself. The generator could then be rolled onto the deck for servicing, and then rolled back on the tower for operation. This week the tower was completed. Here are some photos of the structure in contruction and after competion.

Last summer, my cat Miko (See June 21, 2005 entry) was hit by a car and killed. Needless to say I was pretty bummed, and it took me a while to get over it. Well, I was having a bout of feline withdrawal, and decided to do something about it. I figured with my being out of work and at home for much of the day, it would be a good time to break in a new cat. So I went to the Montville Animal Shelter whence I got Miko, hoping to find a kitten. There were none in residence at the time. So I looked over the available offerings and settled on a year-old black shorthair named Daisy. I took her home, opened the carrier to let her out, and she immediately scooted for cover. And never came out. She found some hidey-hole in my house that I never did locate. I discovered her over a day later, and tried to acclimate her to myself and the surroundings with no success. I figured that if I was going to have a cat, I wanted one that was at least a little sociable. So I rounded her up, brought her back to the Shelter, and returned with her brother Donald, who looked just about identical. Donald was much more accommodating (and maybe I was a little more patient) and came to adjust much better. I didn't like the name he came with, and sought around for another. I settled on "Sasquatch" because of the size of his feet. I thought at first he was a 6-toed cat, but no, they were just very big. And when he spread his claws, which showed very white and prominent against his black fur they emphasized the size. He's settling in very nicely, and doing all the good cat stuff that cats do. I hope Daisy finds a home.