December 21, 2001
Computer Disaster
(Warning: Techno-yap follows. Those whose eyes glaze over in response to computer talk should skip to the next article.)

Last Thursday, my new computer slagged. The entire guts were reduced to mashed potatoes. I brought it to the dealer and they replaced the hard drive and the motherboard and the power supply. The supposition was that the power supply blew, and then wiped out the rest of the works.

After a lot of head-scratching and useless consultation with tech support, I finally figured it out on my own. Here's what happened: take note if you are doing the same thing.

I back up my files on CDROM, using the Adaptec Easy CD Creator that comes bundled in Windows ME. The process that this program uses to copy files onto a CDROM is as follows. One first creates a "CD Layout". This is a list of files and directories to be copied. This list is given a name. One then uses this named layout to tell the software which files are to be copied.

Trouble is, what I wanted to do was to copy the "My Documents" DIRECTORY as it existed at the time of each backup. The way the software thinks of it is to copy the set of files that was in the My Documents directory AT THE TIME THE "MY DOCUMENTS" CD LAYOUT WAS CREATED!! So no new documents I added after the time the CD layout was created were recognized or copied.

What gave me the clue were two dialogue boxes that showed up before the copy process took place. One read:

"WARNING: Some source files have been changed since the CD layout was created. Choose 'Stop' to cancel the recording process. Then select 'Validate Layout' to see which files have changed. If you choose to continue, the files in the CD layout will be temporarily updated to reflect the changes."

I read that and said to myself, "Well that's good. I want the changed files to be updated. I'll continue." The second dialoge box read:

"WARNING Some source files have been moved or deleted since the CD layout was created. You should choose 'Stop' now, then select "Validate Layout" from the File menu. This will privide details of which files cannot be found. If you choose to continue, the missing or moved files will be temporarily removed from the disc layout to reflect the changes."


I read that and said to myself, "Yes, I know these files have been removed. I don't need them anymore, so I don't care if they don't go on the copy. I'll continue." THE DAMN THING NEVER WARNED ME THAT THERE WERE NEW FILES ADDED TO THE LAYOUT SINCE IT WAS CREATED, AND THAT THEY WOULD NOT BE COPIED ONTO THE CD!!!! I assumed from the two previous dialogues that the layout would be copied in its latest configuration, since that was the case with changed, moved, or deleted files. It apparently wasn't the case with ADDED files.

I verified that by creating a layout, doing a copy, adding a test file, and doing another copy with the same layout. The added file never showed up in the second copy. I then did the "Verify Layout" command and made another copy. The new file DID show up in the 3rd copy.

Well, I now know what to do to get all my new files in the future. What I want to know is how do I get to the idiots at Adaptec and let them know what idiots they are. 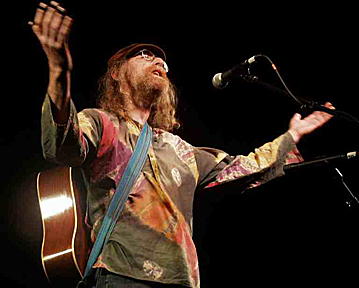 This year, I was selected to present a Formal Showcase at the North East Regional Folk Alliance Convention (NERFA), held at SplitRock Resort in Lake Harmony, PA on November 9-11. This is an annual gathering of performers, presenters, radio people, recording people, agents, and other movers and shakers in the Folk world. About 250 acts applied for the Formal Showcase, and I was one of 20 selected. Each act gets 15 minutes on the big stage with professional sound and lights.

"Fifteen minutes!" I thought. How best to use only fifteen minutes? The material I present is so varied, and some of my best pieces are 7 to 13 minutes long by themselves. I decided to do "Give Me Just A Little More Time" to display my guitar work, preceeded by a real nice short Robert Service poem I found that is quite apropos. I followed that by "Jake and Molly", figuring that the recitations are what set me apart from the crowd, and comprise some of my best material. I finished with "Hamlet".

"Jake" was paced about 15% fast in order to not run over my allotted time by too much. I was concerned about that, because the timing is crucial on that piece. Nonetheless, about half way through it I looked out at the audience, and I saw nothing but eyes. That's when I knew it was a lock. Nobody was talking in the back. Nobody was fidgiting. I had every last soul in the room hanging on each word. "Hamlet" was the capper, thanks in no small part to Jody Gill, who was signing the performance. I had briefed her on the piece earlier so she knew what was coming. I announced the piece, and turned to her and said, "Ready Jody?" And everyone in the audience who had heard the piece before suddenly realized what was coming, and let out a roar. I launched into it, and it was Saturday Night at the ASL races. At the end of the piece, I turned to Jody, fell to my knees and kow-towed. And Jody keeled over flat on her back in a mock swoon. And the audience came to its feet and applauded.

It couldn't have gone better if I had scripted it. I nailed all the difficult stuff, and everything went over perfectly. The short term results were a number of inquiries at my table in the Exhibit Hall. Long term...who knows? The incredible audience reaction confirmed to everyone there (not least of all myself!) that I am able to command a big stage. I'm hoping for some larger festival bookings. We'll see. Meanwhile, I feel real good about the performance, and that's left a long-term glow about which I still smile when I recall. For a video of the performance, click here.


In the five days since the disaster (I almost wrote "tragedy". That would be inaccurate. The word "tragedy" implies the awful consequences of chance or circumstance. This was deliberate.) in New York and Virginia, there has been volumes written and said on the subject. In the weeks to come, the words will pile higher than the buildings that were brought down. I'll try not to add more than necessary.

First, let me say that I am OK (physically, at least). But virtually everyone I know is one or two degrees of separation from someone who had firsthand experience with the attack. I am very concerned for the future of this country. I think we are in for a hard time for years to come. What angers me more than the killing of so many of our people is that the act will likely turn so many of our people into killers. I hope we keep in mind as a nation and as individuals that one cannot exact revenge upon a people for acts commited by the worst examples of that people. My heart goes out to the families and friends of the victims. It also goes out to the millions of Muslim and Arab people who neither had or wanted any part of this business. May you not get caught up in the very necessary business of rooting out the individuals responsible. And may you have the courage to withold support from those individuals when they commit acts in the name of Islam that defame that faith.

The very least of consequences of the infamy of September 11 is that the subsequent disruption of flight schedules has caused my Downeast House Concert in Ellsworth, ME planned for September 15 to be postponed to May 4, 2002.

Best to all of us in these times.