On Saturday night, December 10, I slipped on some ice and broke my leg. I Went to the ER and had x-rays taken and a half-cast installed. . Pain is minimal to nonexistant unless I try to make the foot go where it doesn't want to. Inconvenient and clumsy as all hell, though. I'm getting around on crutches.

I got to the orthopedist Tuesday morning. The verdict is that it is as good as can possibly be and still be broken. I have a fracture of the left fibula. No bones are displaced. I have been fitted with a fiberglass boot that looks like a ski boot. I will be able to remove it to bathe after a couple of weeks, much to the relief of those in my vicinity. I expect to go back to work on Wednesday if it doesn't snow. I have temporarily traded my stickshift Mini Cooper with a friend (Thanks, Mark Edelman!) so I have an automatic I will be able to drive. I'll still be probably mooching rides off others to minimize the driving I do while so encumbered. If all goes well, the boot will come off in 6 weeks. I don't know when I'll be dancing again. But I will not be able to play the violin.

Many thanks to those who have helped me with transport and chores, and to those who will in the future. Please pass the word on to anybody you think will be interested. The funny part of it all is that Miko (see item derectly below) is terrified of the aluminum crutches. I think he equates them to the vacuum cleaner.

Went into work on Wednesday. Tiring, but it will get better. One helpful soul suggested I get a single rollerblade to help me get around the plant. I told him I'd also need two training wheels as well. Maybe a Segway?

Update December 28: Healing has been rapid and without incident. I am now walking around mostly without the crutches or the boot. This is not with the blessing of the orthopedist. If he ever found out, he'd probably break my leg. But the swelling is way down, and the lovely technicolor foot has receeded to its usual skin color. There is absolutely no twinge of pain or discomfort, and I've actually fallen a couple of times with the boot because of its clumsiness. So I will use the prosthetics only when I'm going outside or walking for long distances. I'm going on the theory that if it hurts, it's probably doing me no good, and if it doesn't hurt, it's probably doing me no harm.

Update February 12, 2006: Well, I saw the orthopedist last Thursday, and he pronounced me healed, and told me to go and sin no more. As of the beginning of February, I was officially off the crutches I had in practice abandoned by the beginning of the year. I underwent a couple of sessions of physical therapy and some exercises. So I ran my first mile (well, shambled, rather than ran) since my accident. The leg was fine, but the rest of me was so out of shape that I felt almost ready for the crutches again. Should be dancing again in a week or two.

General advice: If you ever take the notion to break your leg just for the fun of it...don't. It's a bad idea. 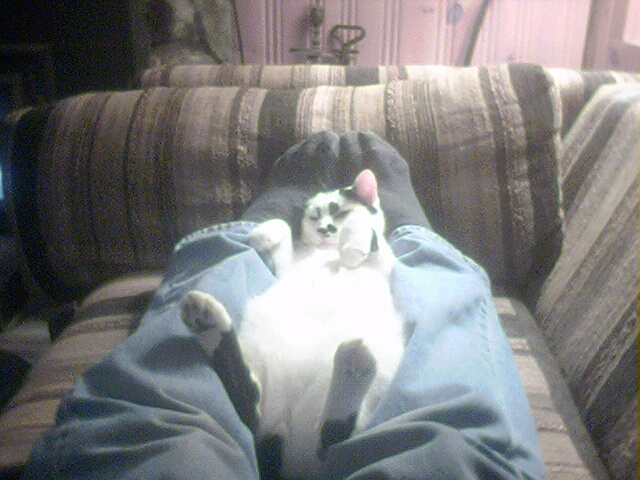 So I'm stretched out on the couch vegging out in front of the tube, and my cat Miko decides to join me and make himself comfortable. I have a new PDA with a built-in camera which was in my shirt pocket at the time. Reached into my pocket and took the picture. 'Nuff said. 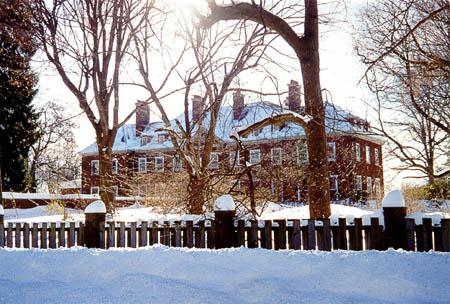 Since 1978, I have been Program Chairman of the Minstrel Coffeehouse. On April 15, the Minstrel will be moving to new facilities at the Morristown Unitarian Fellowship, 21 Normandy Heights Road in Morristown NJ. This will be about the 6th or 7th home for the Minstrel. (Depends upon whether you count a temporary move while one facility was under renovation, and whether being at the same site over two separated time periods as being one home or two.) I will be performing at the opening show of the new location. (It's easy to get a booking when you sleep with the guy who does the booking.)

The MUF is a very classy place. It's a converted 1905 mansion with a separate modern attached meeting hall where the concerts will take place. Back in the '70's the venue had been used occasionally by some of the better-known local acts to produce their own concerts. I remember attending these events, and gazing enviously at the facility, thinking what a wonderful place it would be for the Minstrel. At the time, the rental price was way beyond our means.

The MUF is a very classy place. It's a converted 1905 mansion with a separate modern attached meeting hall where the concerts will take place. Back in the '70's the venue had been used occasionally by some of the better-known local acts to produce their own concerts. I remember attending these events, and gazing enviously at the facility, thinking what a wonderful place it would be for the Minstrel. At the time, the rental price was way beyond our means.

Over the years I had from time to time attended concerts at the Fellowship; some produced by MUF itself, and that sense of a high-class and welcoming venue was always there. Eventually I even got booked into some of their events, the most recent of which was back in May '04 when they asked me to be the opening act for a Mad Agnes concert they produced. That old feeling returned as soon as I walked into the building. So on the spur of the moment, I asked the organizer, just hypothetically, what she would think of the Minstrel's moving to the Fellowship. Her eyes lit up, and she said she thought that would be wonderful. So I started putting out tentative feelers with the leadership, and everyone's reaction was similar. They told me that music was always a big part of the MUF's activities, and to have an ongoing music series would be great.

It was that attitude that spurred me to pursue the matter further. At every step of the way there was enthusiasm and cooperation from their Board. They were willing to work with us on a reasonable rental cost. When it came to dealing with the physical drawbacks of the site (echo-y sound and lack of storage space), they were receptive to our proposed solutions that would impose some noticeable changes to the facility. (Large acoustic panels on the walls of the meeting room, and installation of benches in the lobby that would double as storage containers.) This willingness to work with us was what really sold me on the move. I'm the sort of guy who resists change and hates moving. But my gut tells me that this will be a good move.