My friend Jenny and I took a holiday in the British Virgin Islands the beginning of December. We spent a week in Virgin Gorda and a couple of days on Tortola doing mostly nothing but vegging out in the sun. Had a bit of an adventure at the outset when I left my passport home. So we spent an unscheduled day in St. Thomas (how awful!) while a friend got it from my house and Fedex-ed it to me there. It showed up around 3:30 in the afternoon the next day, just in time to book a 15 minute flight in a 6-seat Cessna (Air Sunshine) into Virgin Gorda by sundown. Stayed in a rented bungalow. No car, no phone, no TV. Just an assortment of perfect beaches within 10 minutes' walk. The place has been developed by some very rich people who have spent a great deal of money on some very good architects, who have managed to build some magnificent homes that manage to blend into the landscape without scabbing it all up. There was a brand new one next door to us that went so far as to have a cement roof that was sculpted to look like a mountain ridge-line. You'd hardly notice it even though it was 50 feet away. The landscape is pretty spiffy too. Enormous boulders the size of houses scattered all over in random piles. We managed to bring along a camera with a dead battery and no charger, but check out these photos to give you some idea. The island is pretty tiny. You can see pretty much all of it in a day if you rent a car, which we did for one day.

After a week of that, we took a fast ferry to Tortola for two days. That island is much more developed, and not nearly as tastefully. We did make a nice trek through a mountain rainforest in a National park at the highest point in the island. An hour's walk brought us to the fig tree in the photo, where we met a couple from New Jersey, who were kind enough to take the photo above and e-mail it to us. Perhaps we should have been a little more careful of what we were wearing. I suspect that if we got too close to each other with our respective shirts, we might have set off a chain reaction that could have made a radioactive slag pile of the vicinity.


I got a letter published in the November 2006 issue of "Car And Driver" Magazine. The letter was in response to a column by contributer Larry Webster about fuel-saving techiques. They edited my letter slightly. I'm reproducing it here in its original text:

Webster's column presented some figures that contradict something I took for apocryphal fact. He states that turning off the air conditioning at 75 mph yields a 5% increase in fuel economy. Open the windows, however, and the gain, he says, drops to 2.5%. I thought at highway speeds the drag of running the A/C with the windows closed was less than that of open windows without A/C. (I understand that this is very much a function of the specific car and the speed.)


But here's a radical proposal for improving the nation's average gas mileage: Impose a "national speed limit" of 27 miles per gallon. What that would look like in practical terms is a two-tiered speed limit. Reimpose the 55-mph national limit, but give cars with EPA Highway ratings of greater than 27 mpg a sticker that permits them to go a maximum of 75 mph, based upon the posted limit. Maybe that will redirect sales of SUV's to more reasonable vehicles, but still allow people who absolutely need the capacities of big vehicles to drive them, albeit at more economical speeds. 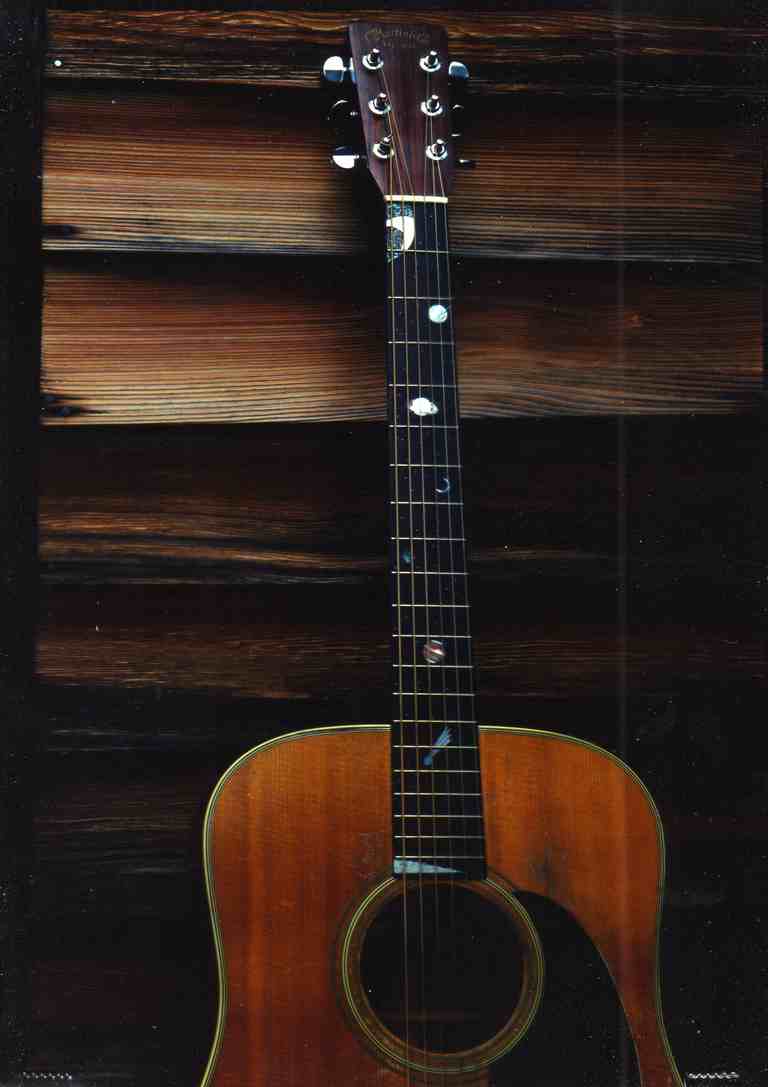 There have been numerous requests for a photo of my guitar neck, so here it is. The guitar is a 1969 Martin D-28. The inlay is my own design, and I cut all the pieces (except the comet and the lunar surface) from abalone and mother of pearl. I used to build model airplanes in my youth, so I had the tools and the skills. The pieces were inset by luthier Bob McNally, who is best known these days as the designer of the Strumstick and the Backpacker Guitar, which is being built under license by Martin. I shared a house with Bob for a couple of years, and I traded him a fret-and-inlay job for a motorcycle.

I bought the guitar in 1975. At the time, my main instrument was a Martin D12-20 12-string, and I was looking for a good 6-string to round out my arsenal. I had my mind set on a Martin Dreadnaught. So I went into New York City's "Music Row", which was a section of East 54th Street (I think) graced with 4 or 5 major music stores lining both sides of the street. I methodically went into each establishment, and asked to see a number of new and used instruments. I took copious notes on each one, recording their model number, serial number, year of manufacture, and all salient points, positive and negative about their condition, sound, appearance, playability, and other features. After spending much of the day at this pursuit, I was almost ready to make a decision. But I decided to check out Matty Umanoff's down in Greenwich Village first. I hopped on the subway, went in, and asked to see some Martin Dreadnaughts. I checked out a new D-35, made all my notes, and then Matty handed me a 1969 D-28. I picked it up, played it some, and then tossed all my notes in a handy trash can, tore off and signed a check, handed it to Matty, and said, "Fill in a number!" He wrote $600.00. Pricey for the time, but some of the best money I've ever spent. In all the years since, I may have played 2 or 3 guitars I've liked better. But still, they weren't my guitar!

The inlays are described below. Clicking on any of the images will show an enlarged view. (Best viewed on a full-sized monitor, rather than a smart phone.) The entire neck is sprinkled with stars, which were created by drilling numerous holes in the fingerboard and inserting lengths of silver wire, and sanding flush. There are also a number of higher magnitude stars and two of Jupiter's moons made from slightly heavier gold wire. The stars are not evident in the resolution of the above photo, but they can be seen clearly in the detail photos of the inlays below.

Inlay details
(Click on any photo to view it in full screen.)